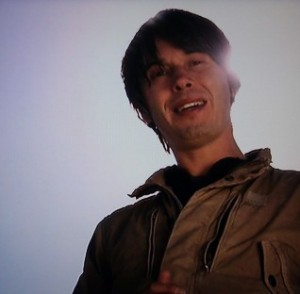 Professor Brian Cox brings a fresh face to popular science. His new TV series “Wonders of the Universe” will only add to his growing popularity. There’s no question his first TV series “Wonders of the Solar System” paved the way; and the subsequent series “Stargazing Live” consolidated Cox in his position as a star [pun] of popular science.  Suffice to say that science needs people like Cox, a look at his facebook or twitter pages will show the interest he’s stirred amongst everyday people. Don’t worry, in this post I’m going to talk physics not personalities, science not social networks 🙂

Last Sunday it seemed a torch was being passed. As “The Sky At Night” celebrated it’s 700th episode, over 54 years under the stewardship of the legendary Sir Patrick Moore; the pretty-boy of physics (myself excluded of course), Professor Brian Cox was beginning his new series “Wonders of the Universe”. The first episode is entitled simply, “Destiny”.

Cox shared some very interesting numbers with us and I’m going to list some of them here for your delectation: 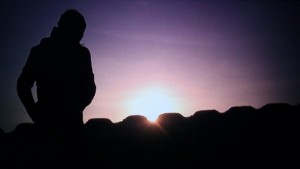 Studying the stars is not a recent phenomenon, man has being doing it for thousands of years. Cox went to Chankillo in Peru, where 2500 years ago the inhabitants there built a solar calendar using rocks and knowledge of where the sunrise occurred throughout the year. But I have to correct Cox in one thing he says: “What a magnificent achievement, I mean, it’s probably one of our earliest attempts to measure the heavens“. No doubt it’s a magnificent achievement, but it’s not near the first. More than 5000 years ago the inhabitants in Ireland (yes I’m Irish :)) built structures (Cairns) based on the solar calendar. One example is Newgrange (3200 BC) based on the Winter Solstice, another example is Lough Crew (3200 BC) based on the Autumnal Equinox. We’ll forgive Cox that since he’s not an historian after all 🙂

Cox had to deal with some large numbers, after all he’s dealing with the whole universe and it’s entire lifetime. He rightly points out that some of these numbers are unimaginably large (more on this later). But he makes a decent stab at trying to ground these large numbers into something sensible by comparing them to long-term events as diverse as turtles laying eggs, an abandoned diamond-mining town,  a decaying marooned ship, and a glacier.

Professor Cox talked about the Arrow of Time, and how the Second Law of Thermodynamics states that entropy is always increasing. You can think of low entropy as order (like a nice new car) and high entropy as disorder (a battered old car). I have to be a pedant and say that entropy doesn’t have to increase, entropy can remain the same and it can decrease. For example in biology,  high entropy molecules are combined to make low entropy life forms. Another example, in physics, is the formation of planets and stars – gravity tends to reduce entropy. But the overall point Cox makes is that, in the long run, the Universe will tend towards a state of high entropy. So the next time your kids mess up your house, it’s not their fault, it’s the Second Law of Thermodynamics dictating that entropy must increase!

Now here’s a a name to note, GRB090423, it’s a faint red glow in the sky (if you have the right equipment) and it’s the afterglow of the explosive death of one of the first stars in the universe. The light reaching us now took 13 billion years to get here, which means the star died when the universe was just over 600 million years old. As Prof Cox said it’s the “oldest single object that we’ve ever seen”. 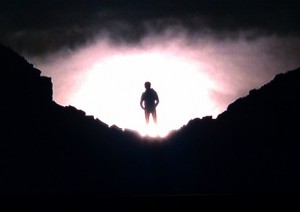 Messianic, Mega-Star, Alien visitor, or the Sun shines out his Solarse?

Now, to lighten things up a little. I noticed in the first series “Wonders of the Solar System” a lot of the time the director would take shots of Cox backlit by the Sun. This resulted in much squinting on my part as the Sun came into view and shone down the camera lens. That’s fair enough I suppose since the series is about the Solar System. But I had to laugh when I saw the same camera shot used several times in the first episode “Destiny” of the new series “Wonders of the Universe”. The more I looked at them, the more they began to look like Messianic shots. Oh, the irony! The photo at the top of this post is an example and this one is my favourite; well I suppose he was a rock-star back in the day 🙂

With that comic aside out of the way, lets turn to the end of Earth, our Solar System, and the Universe. Bummer! Earlier I said I’d get back to some really big numbers so here we go. Prof Cox describes some of these as “unimaginably large numbers“:

Finally I’m going to just give you some great quotes from Prof Cox, which essentially map out a (rather bleak) future for Earth, our Solar system, and the Universe. 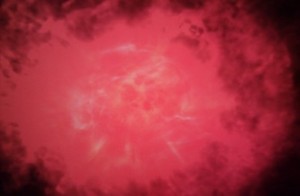 Enjoy the last of the light

“As it [the Sun] begins to run out of fuel, it’s core will collapse, and the extra heat this generates will cause it’s outer layers to expand. In around a billion years time this will have a catastrophic effect on our fragile world. In 6 billion years our Sun will explode. The fate of the sun is the same as for all stars, one day they all must die and the cosmos will be plunged into eternal night.
As the age of starlight ends, all but the dimmest flicker of light in the universe will go out. The faint glow of white-dwarves will provide the only illumination in a dark and empty void, littered with dead stars and black holes. By this point the universe will be a hundred-trillion years old”.

“[Black dwarves are] White dwarves that have become so cold they barely emit any heat or light. Black dwarves are dark dense decaying balls of degenerate matter, little more than the ashes of stars. With the black dwarves gone, there won’t be a single atom of matter left. All that will remain of our once rich cosmos will be particles of light, and black holes. After an unimaginable length of time even the black holes will have evaporated and the universe will be nothing but a sea of photons gradually tending towards the same temperature … absolute zero”

“The story of the universe finally comes to an end. For the first time in its life, the universe will be permanent and unchanging. Entropy finally stops increasing because the cosmos cannot get any more disordered. Nothing happens, and it keeps not happening, forever. It’s what’s known as the heat-death of the universe. An era when the cosmos will remain vast and cold and desolate for the rest of time … the arrow of time has simply ceased to exist. It’s an inescapable fact of the universe written into the fundamental laws of physics, the entire cosmos will die.”

…more coming and wise (see what I did there!) when I review episode 2 of Wonders of the Universe. Please leave feedback or comments and let me know what you think.

27 Responses to Professor Brian Cox – Wonders of the Universe – Destiny.