Christopher Potter You Are Here – Review 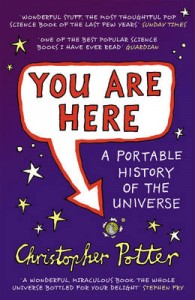 Christopher Potters Guide to the Universe

Christopher Potter You Are Here is a very interesting read. That is if you’re at all interested in the Universe (or Multiverse), our solar system, our planet (that’s Earth for most of us), and our species (Homo Sapiens Sapiens [sic]). And of course how all of the above came about and evolved. If you’re not interested in any of the above, or believe it didn’t evolve, then you’re probably a monkey tapping away at a keyboard and you’ve inevitably typed this URL and you’re here. Hey, there’s a banana behind you!

One surprising thing about this book is that, apart from the cover art, there is not a single picture, photograph, sketch, illustration, table, graph or anything. The book is 274 pages of alphanumeric text. Not that one wants a cartoon, but understanding the topics covered lends itself well to pictorial representation.

The upside of this book is it contains an incredible amount of really interesting facts, and these include topics from Physics, Biology, History (deep history relating to Physics and Biology), Philosophy, Psychology and more. For example, did you know that for every cell in your body – there are 10 bacteria cells on your body (mostly on your skin and in your digestive system). Without bacteria we’d be dead, and indeed life (as we know it Jim) would not have evolved on Earth – where do you think all that oxygen in the atmosphere came from? Bacteria, mostly (see page 229).

The book is aimed at the lay reader, you don’t need a degree in Physics to understand it, although it does help sometimes 🙂 There are areas which I had to read more than once to fully grasp (N.B. /me holds an Honours degree in Physics and these topics aren’t new to me). Quantum theory, Higgs field, Unified Theory etc. I literally scribbled on the back of the proverbial envelope to illustrate some of the points to aid my understanding, and in all honesty the book would benefit from the right illustrations in the right place. Nonetheless there is enough easily accessible information here to keep you annoying your less interested friends with very interesting facts about the Universe and beyond. You won’t understand everything, don’t let that put you off because you’re not alone.

I’ll also point out another book covering similar topics is Bill Bryson –  A Short History of Nearly Everything. Brysons book was published in 2005, Potters in 2009.