Posted on September 6, 2011 by althinking 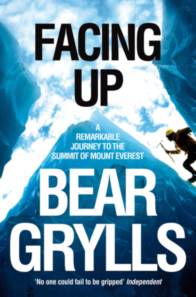 The name Bear Grylls is synonymous with adventure, danger, survival, and eating & drinking things you wouldn’t normally touch with a barge pole! Would you drink your own urine from a gutted snakeskin? I suppose the only thing worse would be drinking someone elses, lol. Like about 1.2 billion other people who watch Bear Grylls Born Survivor (aka Man vs Wild), I wanted to know more about this seeming daredevil adventurer. Was he too good to be true? I hoped not, but I have a healthy scepticism…

So in an attempt to get to know the man Bear Grylls a bit better I bought his book “Facing Up” which tells the story of his attempt to climb Mount Everest; which I discuss below. I also bought his autobiography “Mud Sweat And Tears” which I’ll discuss in my next blog post. You can follow Bear on twitter @BearGrylls

I’m happy to say I thoroughly enjoyed reading Facing Up, and for me it was a real page turner. I wanted to know what happened next, did he make the next bit or was it a disaster? I kept on reading. I like Bears writing style, he puts you on the mountain and in his head with his inner thoughts, he shares the personal struggle. Of course, it’s impossible to physically transmit the actual cold, tiredness, hunger, lack of oxygen, and pain he endured (thankfully for that you have to actually be on Everest); but he does effectively communicate the mental impact of it all.

And, although we live in a physical world, our only experience of it is mental. Ask any person involved in any endurance activity and they’ll tell you the real struggle is mental, not physical. The beauty of this fact is that Bear can and does communicate that mental experience very effectively. I have to say it was nice to step off the mountain (put the book down) and have a nice hot cuppa, that’s a luxury life on Everest does not afford.

In my attempt to get to know Bear Grylls the man a bit better I’ll say I’m well impressed having read Facing Up. Against the odds, Bears Everest attempt was successful, he was the youngest ever Briton to reach the peak at age 23. But was this a once off, an aberration, or does he really have the right stuff? Next up I’ll post my review of his #1 selling book Mud Sweat And Tears, then I’ll know for sure.

Should you read Facing Up? Yes. Well, I think it’s a fine book anyway. If you’ve any interest in adventure, Bear Grylls, the human condition, psychology, sociology, or Everest then it’s an obvious yes. For me it’s a 9 out of 10 rating.

This entry was posted in Books, Reviews and tagged Bear Grylls, book, Facing Up, Mount Everest, review. Bookmark the permalink.